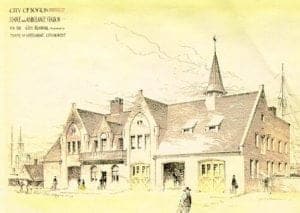 On the morning of June 13, 1861, the members of the Boston City Council gathered at the old City Hall on School Street for a hearing on the subject of health care. A devastating cholera epidemic had left the Massachusetts General Hospital hopelessly overcrowded, and a special committee appointed by the City Council had already concluded that a municipal hospital was badly needed. One question had yet to be resolved, however. Boston’s population was booming, and land was quickly becoming a scarce commodity. Where, the residents of the city wanted to know, would this new hospital be located?

The City Council’s choices were limited. In fact, the hospital would have to be located in one of two areas–either on Fort Hill, in downtown Boston; or in the South End. Several years earlier, a wealthy landlord by the name of Elisha Goodnow had become the first patient to undergo surgery at the Massachusetts General. Grateful for the care he’d been given, Goodnow had left to the city seven apartment buildings on Cross Street in the North End. Under the provisions of Goodnow’s will, these buildings would be sold, and the proceeds would be used to create a hospital that would cater to the needs of the “less fortunate classes.” For some reason, Goodnow had been quite specific about where he wanted this hospital to be located, however. The hospital would have to be built either on Fort Hill or in the South End; otherwise, the city wouldn’t be allowed to inherit Goodnow’s property.

At first, the City Council wanted to build the hospital on Fort Hill. But when plans for the new facility were announced, a group of wealthy Fort Hill residents, fearful that the hospital would attract “paupers” and other unsavory characters, staged a loud and angry protest. The Council quickly reversed its decision, and a site for the new hospital was purchased in the South End.

Unfortunately, this plan had one minor flaw: nobody lived in the South End. In 1861, the South End was nothing more than a barren landfill, and the nearest home was several miles away. How were patients supposed to get to this new facility, a number of citizens asked, when it was located so far away? The Council studied the problem carefully, and came up with the following solution:

“This inconvenience will be obviated in some measure by distributing about the city ambulance wagons, contrived for the purpose of carrying to the hospital, without jar or exposure, patients unable to endure the motion of ordinary vehicles. Upon their arrival they can be raised without exertion by lift to the wards.”

By the turn of the century, a simple communications system had been installed at the City Hospital’s front gate. Whenever an ambulance bearing an injured patient approached the hospital, a gatekeeper would phone the Administrator’s Office, and the surgical division of the hospital would be notified that a patient was about to arrive. Stretchers would be brought to the front door, and a “surgical house officer would be summoned without delay for immediate attendance.”

The first ambulance satellite was established in 1900 at the Boston City Hospital Relief Station in Haymarket Square. This facility, which was little more than a three-story, freestanding emergency room had been created in response to a large number of industrial accidents in the area of North Station. A large door on the Canal Street side of the building allowed ambulance carriages to drive directly into the facility. Stables were located on the ground floor, and sleeping quarters were provided for the ambulance crews, who essentially lived at the facility. The City Council considered this arrangement to be a success, and in the coming years, a number of additional “ambulance stations” were constructed throughout Boston.

After the turn of the century, horse-drawn ambulances were gradually replaced by mechanized ones. Police department ambulances eventually took over much of the city’s emergency work, but the City Hospital Ambulance Service would remain a fixture in Boston until well into the twentieth century.